The "Sortie de bal" Mantle, and How I Realized I Am Not As Smart As I Thought I Was =/ 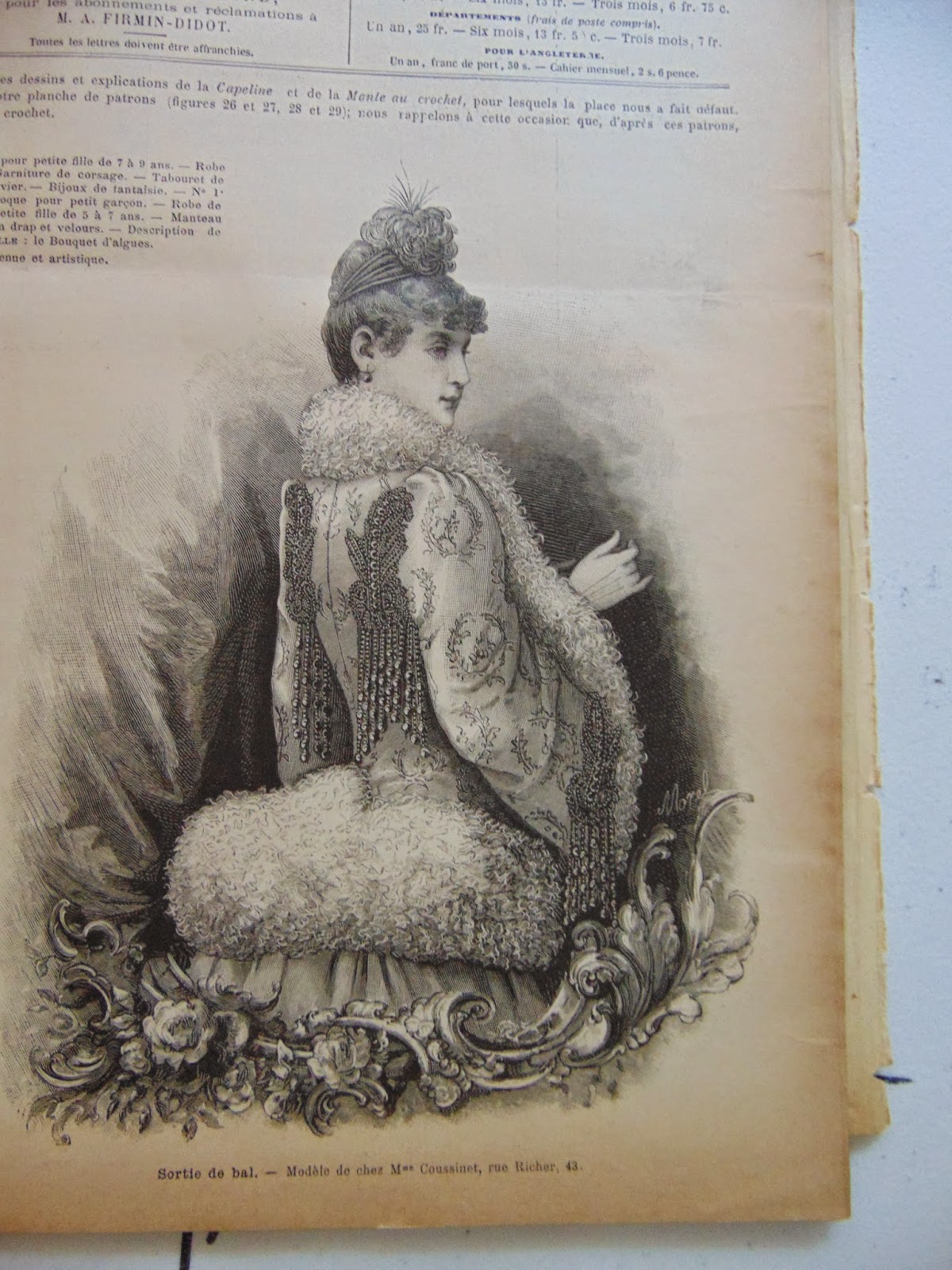 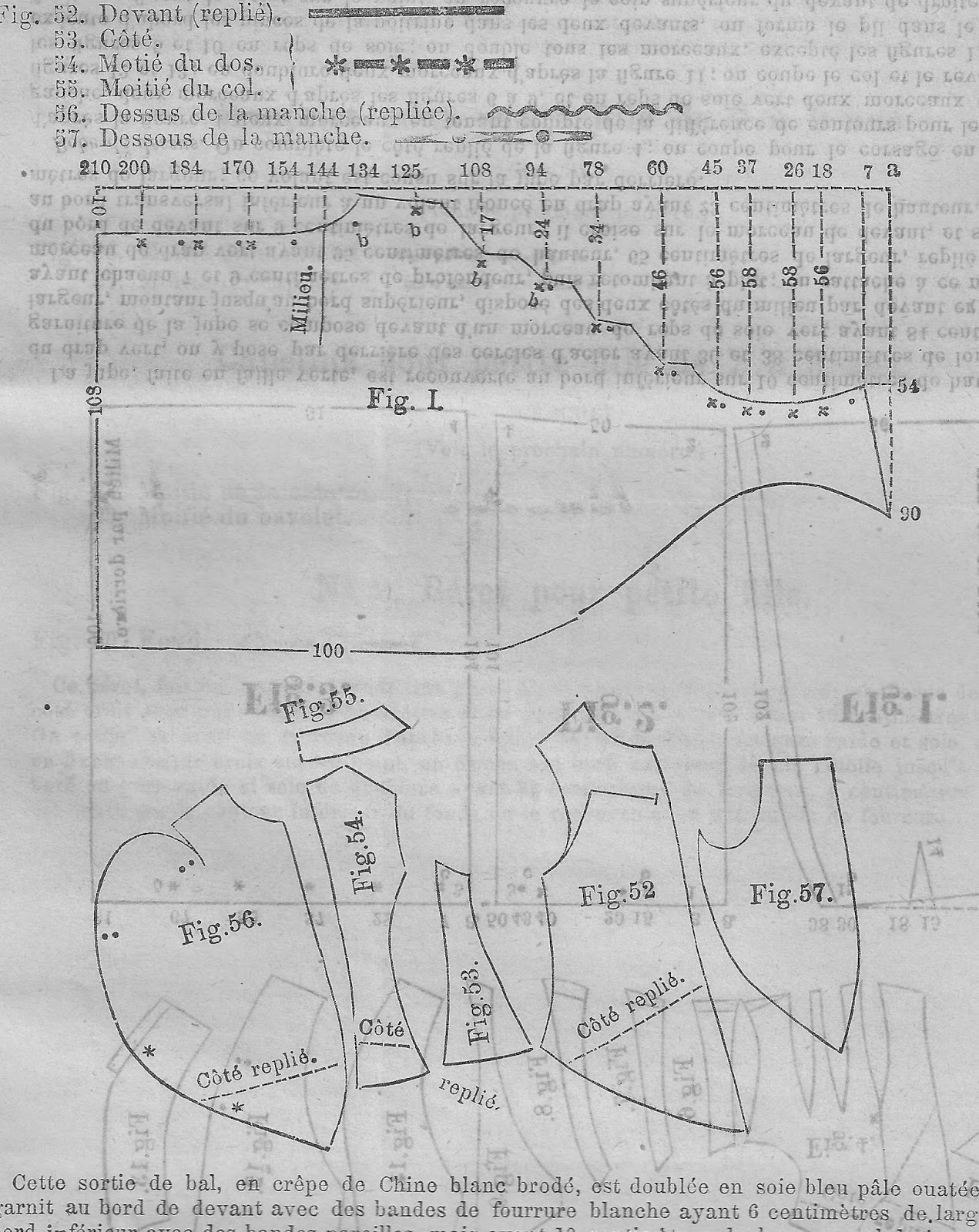 Pieces 52 - 56 are in the supplement and I have already traced them out. The Massive sleeve, though (Fig.I) has to be drafted out according to all the measurements given on it. According to that, the sleeves is 210cm wide. Good Lord! Really? WTH? And the instructions (as far as I am able to translate them with Google) only refer to the sleeve in the last sentences, telling me to "set in the sleeve after pleating." No reference to the lining or how that is set in.

Below, I have written the joining numbers of the pattern pieces so you can see how they are supposed to line up, but it's barely any help to me. I still don't get it. Is Fig.57 set over Fig.52, or underneath it? 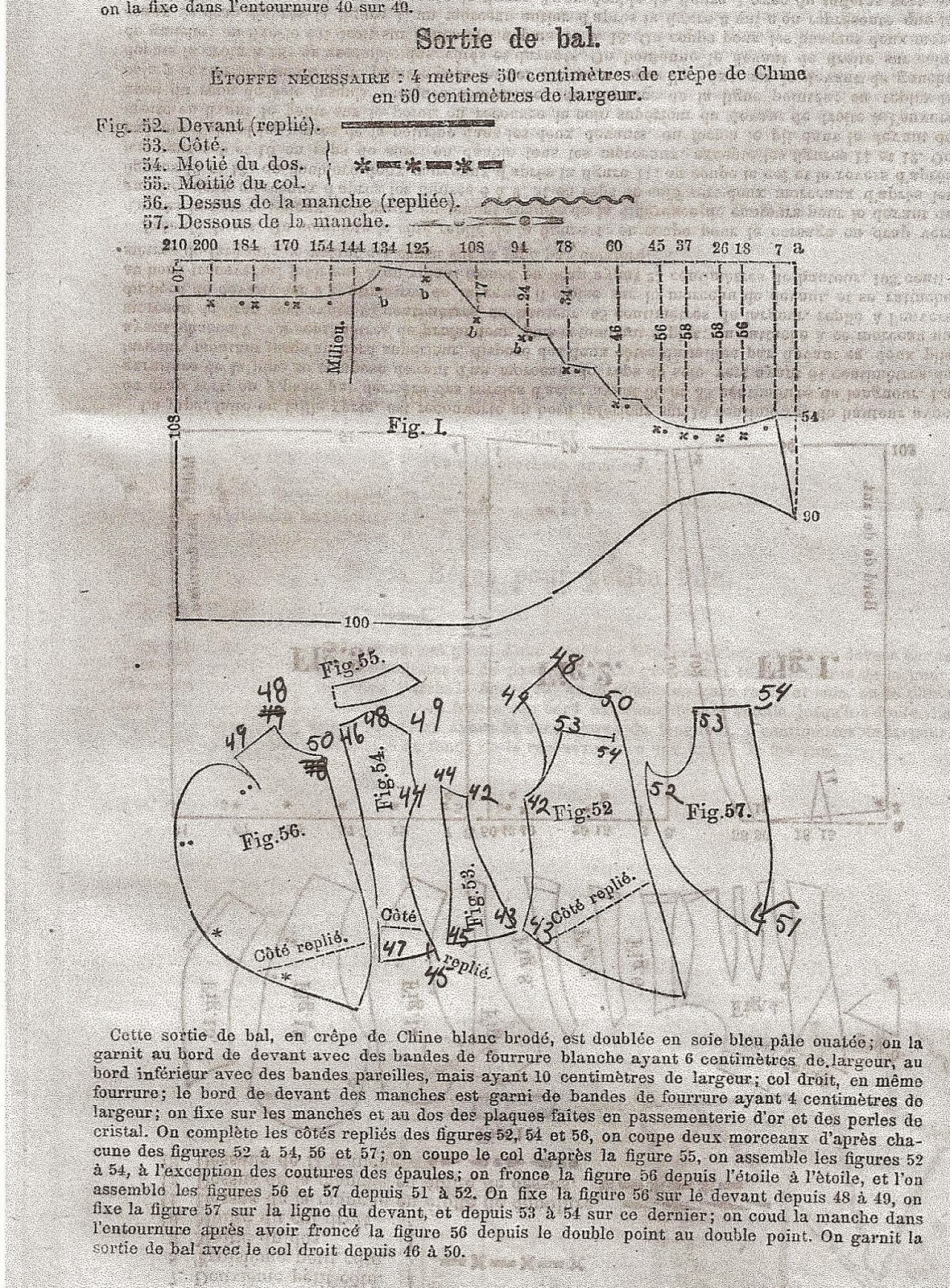 If it couldn't get more frustrating, there are no join-up numbers on the gigantic sleeve at all. The fashion image in the magazine only shows a back-side view, leaving me to wonder what the front even looks like. I'm rather certain Fig. 56 is meant to be the upper sleeve lining, yet I can't see how this works when it's obviously meant to attach to the neckline and shoulder. If I new HOW the gigantic sleeve is mean to be set in, that might make sense to me. As you can tell by my ramblings, I am FRUSTRATED.

I made some copies of the pattern diagram so that I could cut them out and manipulate them around, see if I could figure out how it goes. That helped a little, but I'm still nowhere near confident enough to actually cut anything out. 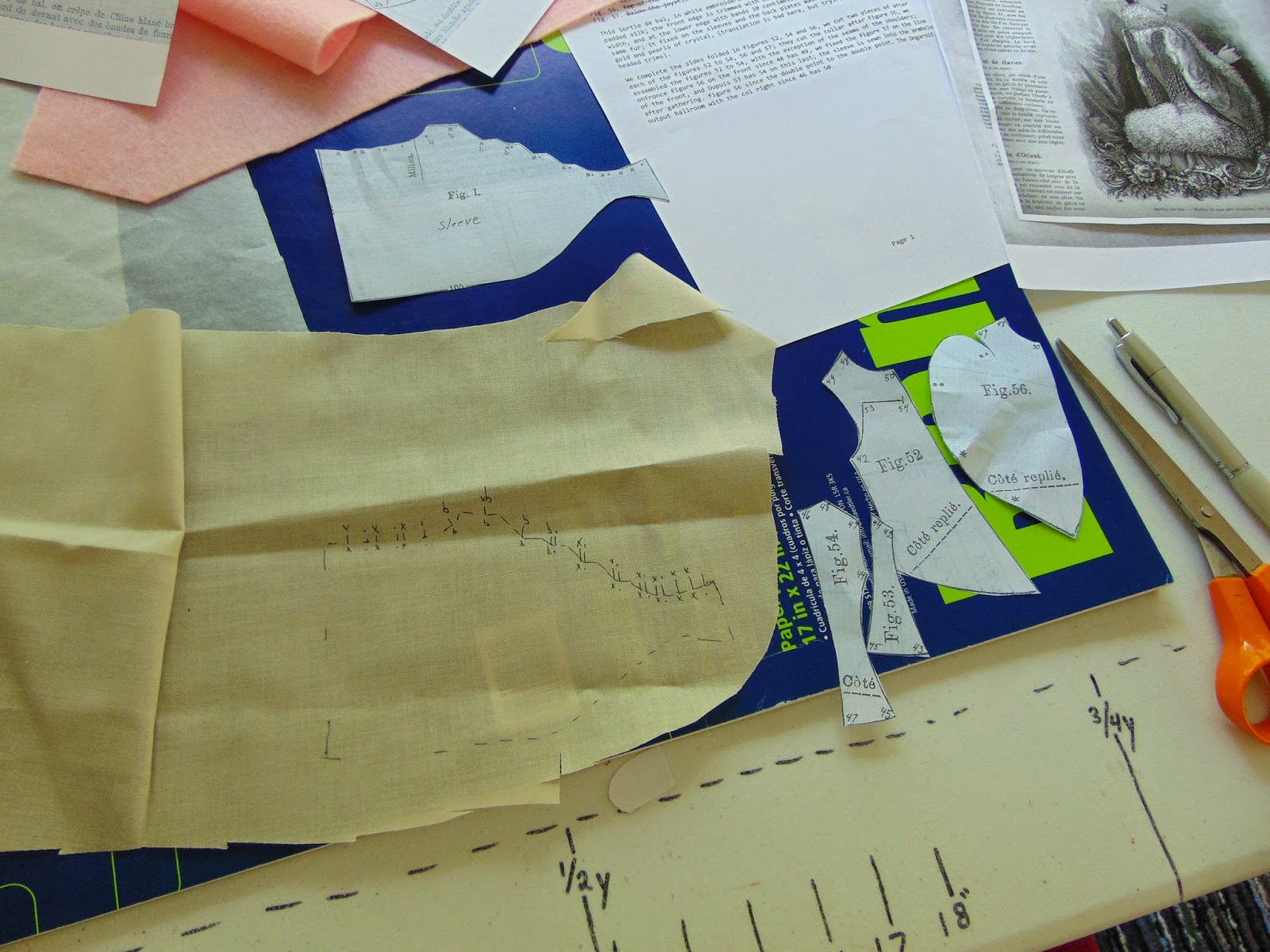 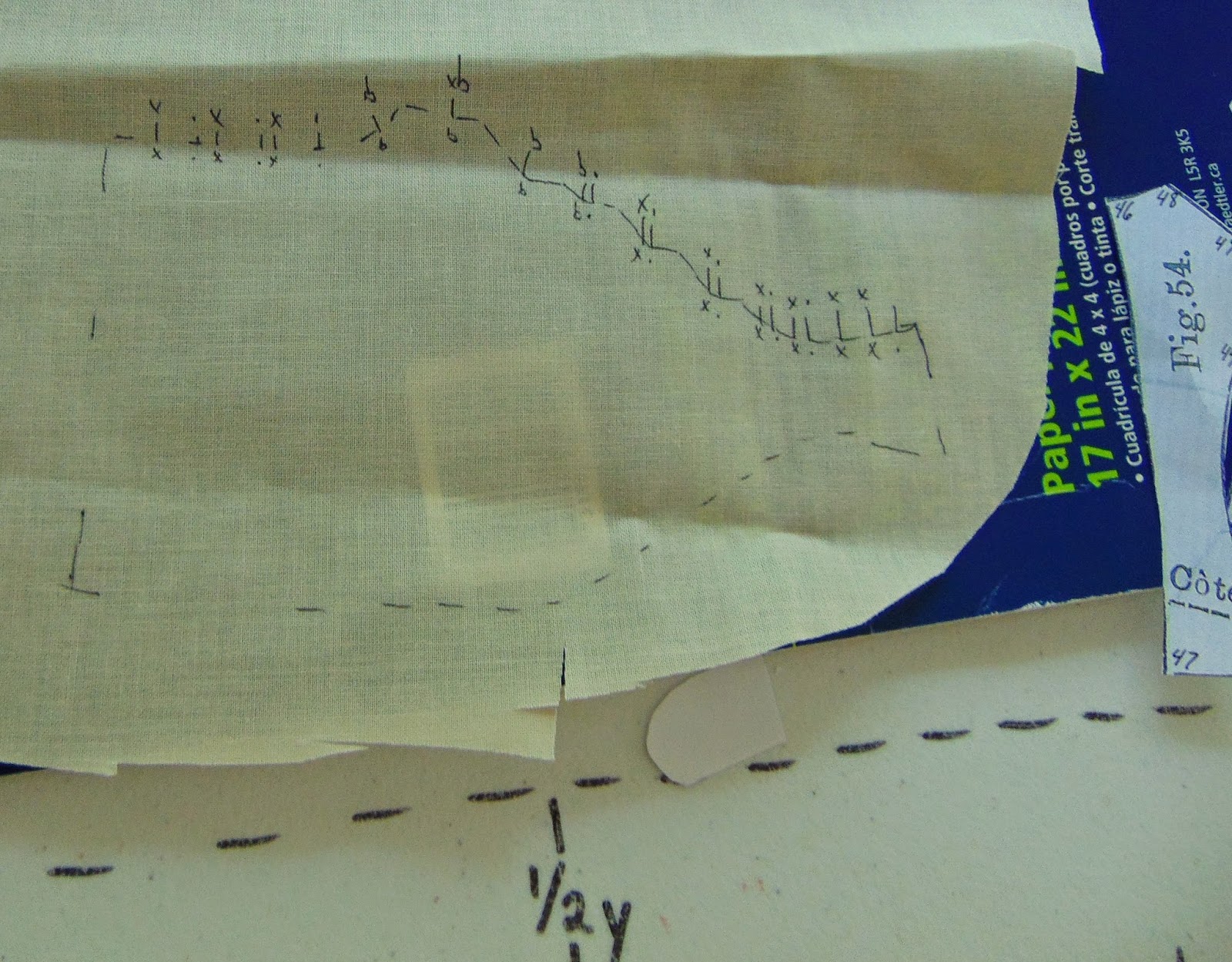 After tracing the pieces out, I'm starting to think I'll have to give up and find a similar style mantle or sortie de bal in one of my English language antique magazines, like Harper's Bazar. Although, considering how few instructions come with those patterns too, I'm not sure if being in English will make much of a difference. If anyone has made this or something like it and can tell me just what the heck is going on, I will much appreciate it. =/