Available on Etsy HERE
Available on ebay HERE
Alterations: I added mariner's cuffs, which are not part of the Waugh pattern but are part of one of the suspected extant coats (see below)
I also brought up the waist by eliminating the "dropped waist" angle that lets it curve out over the hips a bit before reaching the horizontal seam. I'll tell you why I did that further down.

Measurements: *unaltered from pattern. As is.
Chest: 39"
Waist: 32"
Hip: Free
Back width (arm socket to arm socket, across shoulder blades): 13"
Torso (bottom of armhole to natural waist): 9.5"
Upper sleeve circumference: 15"
Petticoat hem: 40" at center front and back.
18th century stays often had the effect of increasing the wearer's final waist size rather than reducing it, depending on the style(and especially if the stays had an inflexible busk at the front). A flat barrel or V below the bustline were the desired shapes, not the hourglass of the 19th century. =) 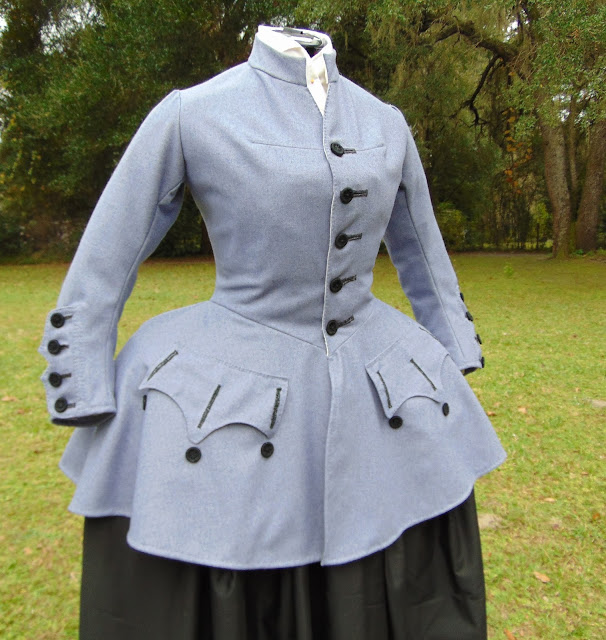 I have made this long draped over-skirt several times, but too often I forget the rule I made for myself the last time: Don't use artificial fabric! I say that only because I had a bear of a time ironing the the seams flat and the edges of the back where the lining is turned. 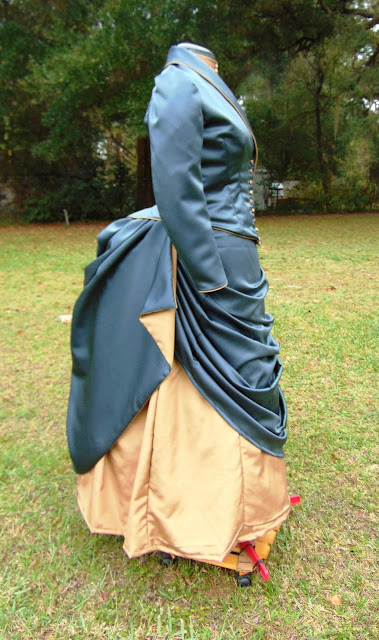 The Cane Hoop Bustle - An Experiment

Pattern: None. Built right on the form.
Materials: #8 Round Reed (about 1/4" diameter). Cotton ribbon. Cotton string
Benefits: Very cost effective. Super lightweight, yet strong. Bustle collapses completely on itself and take up a storage space only 14" square, and barely 2" high.
Down Side: Incredibly labor intensive. All hand work, and must be done on the form.
Available on etsy HERE
This thing was a NIGHTMARE. The end result worked and I think the idea is sound, but the amount of labor that went into making it means I won't be reproducing this. Ever. In order to justify making these in any regular way, they would have to sell for like $250 each, which is an absurd price for a bustle. C'est la vie.

Here you see the silhouette this bustle creates under a petticoat 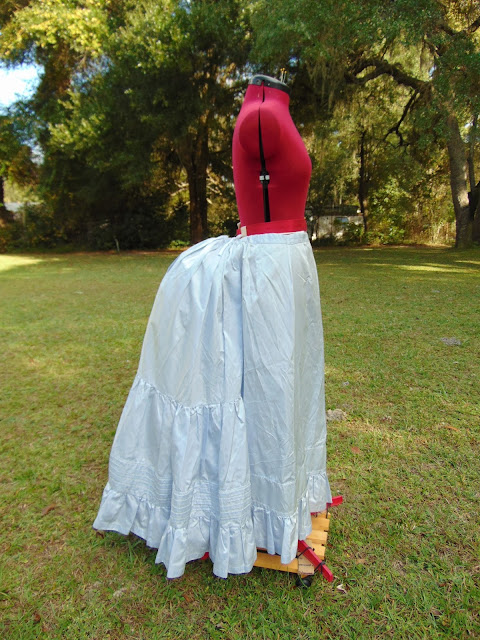 Read more »
Posted by Lydia Gastrell at 18:29 No comments: