Measurements:
I made the largest size, which according to the pattern comfortably fits waists between 38" and 40".


Construction
The thing to remember going in with this pattern is that it is very simple, but just a lot of work. Other than the center front and side sections, the entire thing is just rectangles being gathered to other rectangles. Time consuming, but not very complex. I made View 1, which is the same concept as the others, just more work because the tucked panels are on the front and back.

The closure is at the center back with ties going through the waistband. I created two channels in the waistband so I would have two ties and more support for a tight fit. This isn't really necessary, it's just something I wanted. 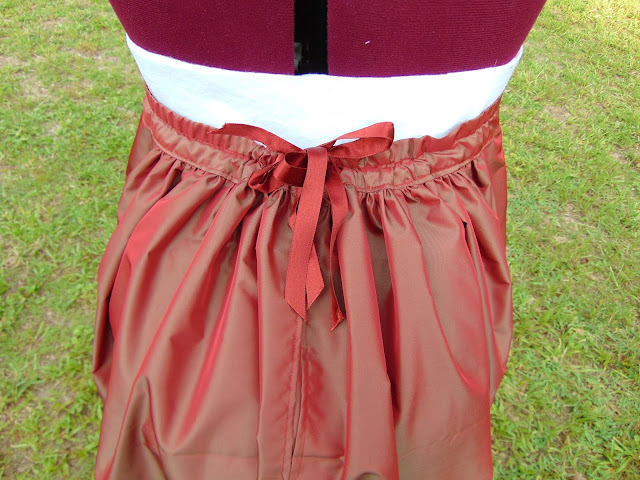 If you make the pattern according to the size chart it provides, you will get a fit on the waist that has the back of the waistband slightly gathered. If you want a smooth waistband at the back, and have no need for the petticoat waist to have wiggle room, just make the waistband in the same way you would make it for a regular skirt (true to size with a hook/eye closure).

Personally, I think ties on petticoats are much better than one-size-hook-and-eye, because you give yourself the wiggle room you might need to accommodate other petticoat beneath. Never know when you might want to layer up! Also, that wiggle room allows you to shift the petticoat from your natural waist if you want. I can't tell you how many times I've done the whole "hip hugger petticoat" in order to mitigate bulk at the waistline from multiple waistbands.

How the Hell Do You Make The Tucks?
Confession time. When I first started sewing about 12 years ago, I made one of the giant civil war petticoats from a Simplicity pattern. That pattern showed two lines that you were to meet up and then stitch to create your tuck. Now, that's a pretty stupid way to do tucks, because in order to see what you're doing, you would have to mark on the outside of your garment, where it would later be visible, OR put 1,265 damn pins all around to do the same job. I did this. You know why? Because the stupid simplicity pattern didn't tell me how wide the finished tuck was. I had to rely on those two lines. I learned my lesson. Everything could have been so much simpler

This pattern has one line per tuck, the place where you will fold, then you just stitch 1/2" from the folded edge. See, knowing that it's 1/2" makes all that dumb "meet this line to this line" stuff unnecessary.

[Sometimes, Simplicity patterns remind me of that middle school gag assignment you got in science class where they told you to write instruction for making a PB & J sandwich. Then the class got to laugh as the teacher slathered jelly on his own hand because you skipped like 7 steps. Some shit is intuitive. We're not computers. LOL =P ]

Anyway....
You mark the line for the fold of the tuck, then just stitch 1/2" all along, then move up to the next tuck. the great thing about this method is that even though you will be marking on the outside of your fabric, that mark will be on the fine edge of the fold you just made. Practically invisible (unless you do something foolish like use red chalk on a thin white fabric. Don't do that). 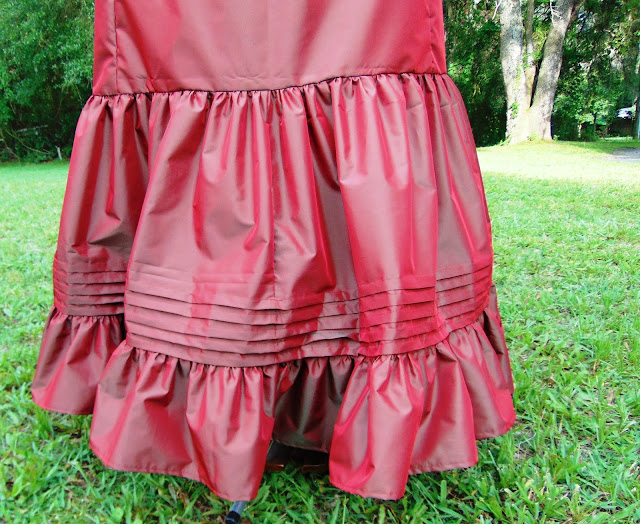 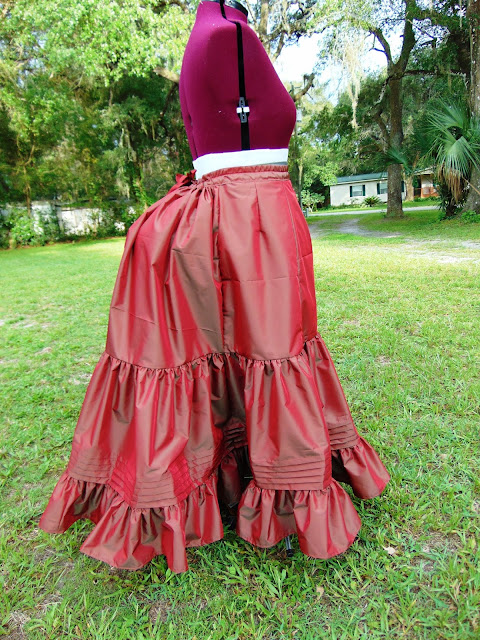 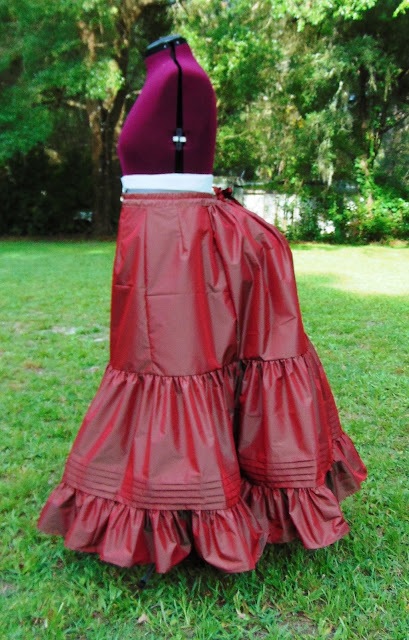 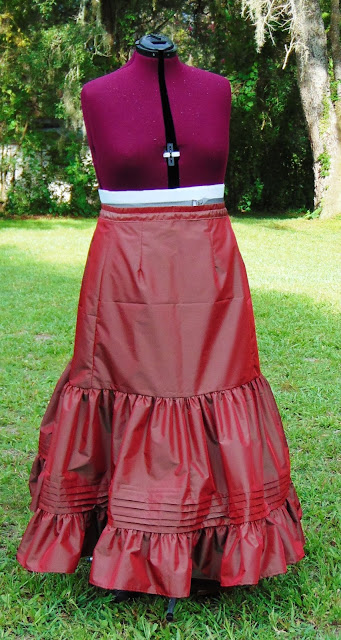 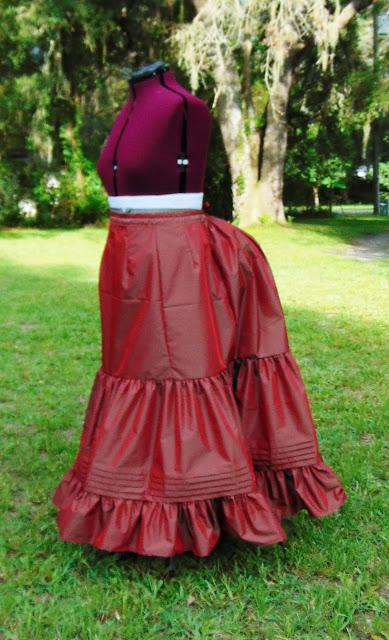 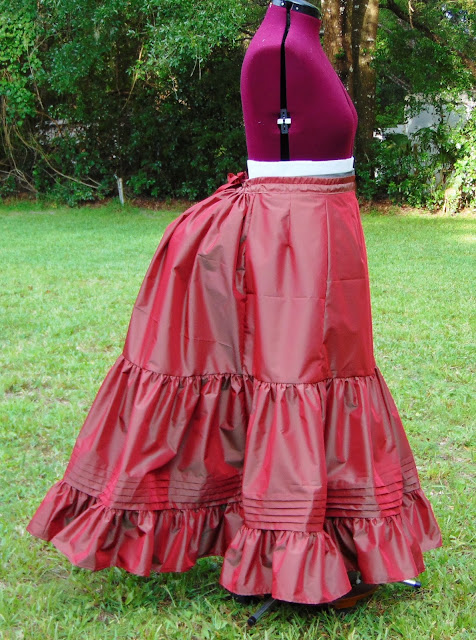 Some math on widths: This petticoat, in View 1, is impressively wide.
The bottom of the tucked middle section comes out to about 176".
The bottom ruffles comes out to more than 330"! I had to separate it into 8 equal sections, then gather each section independently to the corresponding 8 sections I had made on the tucked panels. (You should almost always divide and gather when doing stuff like this. Trying to gather a whole piece and adjust it as you go is one of Dante's circles of Hell). 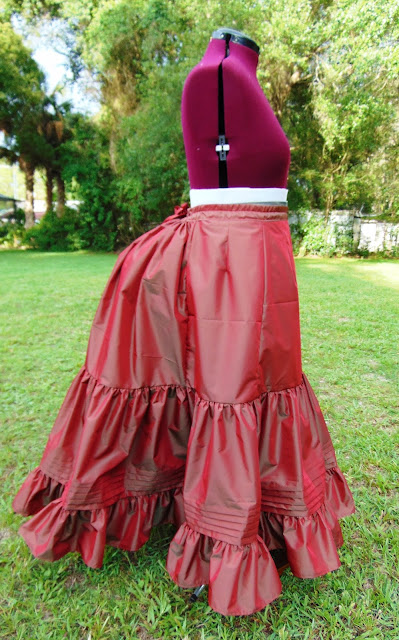 The pattern gives yardages based on 45" wide fabric. If you cut the pieces true to the pattern, you won't really save yourself much by using a wider fabric. But, you can save yourself a bit with a wider fabric on that super long button ruffle. It calls for 8 pieces 44" wide. If you have a 60" wide fabric, you can do 6 pieces  of the full width of your fabric and also have the selvage edge for your seams. No one likes raw cut edges on taffeta. It's a fraying disaster waiting to happen (Actually, it won't wait. It will be immediate) 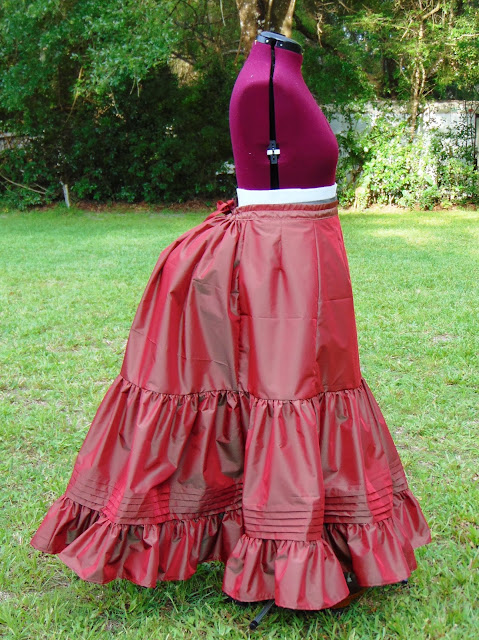