Pattern: None. Basic cutting instructions for men's 18th century shirt, with alterations.
Inspiration: Based on images of an extant hunting frock, labeled as being from "Abraham Dunham 1776". I only had images to work from, as there was a paywall on the scholarly articles related to it =/ (see pics below)
Fabric: 100% linen, unbleached.

Measurements:
A very forgiving garment, not fitted at all, except at the cuffs. I did measure and cut the pieces for a 44" chest and a full sleeve (neck to wrist) of 29". 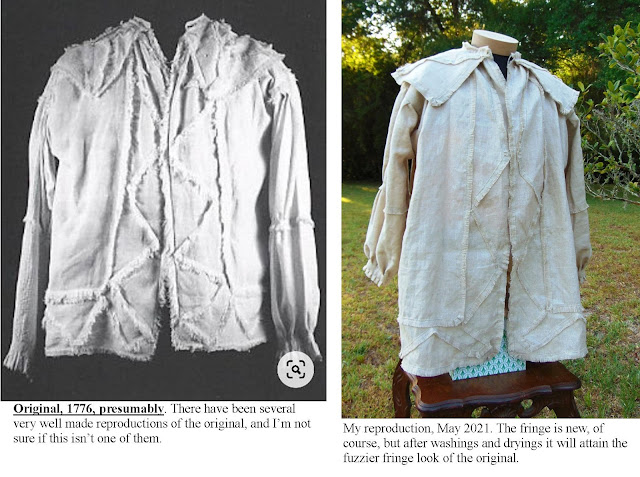 According to several sources, this style of over garment was petty unique to mid-Atlantic America, specifically Virginia. It would have been made from durable canvas fabric, linen or cotton. There are also some sources mentioning buckskin versions, I imagine for winter weather.

Despite being called a frockcoat in several sources, this is really a shirt, also referred to as just a "frock". It is constructed the same basic way as men's shirts of the time; a collection of rectangles manipulated into shape. The only curved piece is the cape/collar, which I drafted last onto the otherwise finished shirt (having a tailors form to work on makes this much easier!)

I used the below cutting diagram and construction guides as my jumping off point.
The information on both images is "Compiled from Beth Gilgun's "Tidings from the 18th Century", but I have no idea who drew the illustrations or made them available online. They've been reproduced in so many places without creator attribution, so...to whomever you...thank you very much! 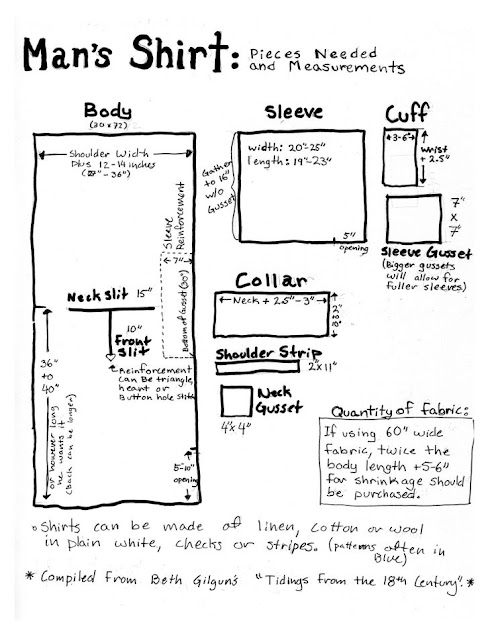 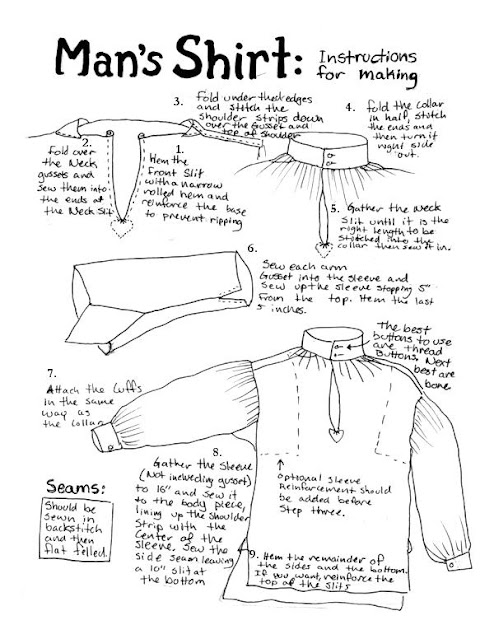 Obvious changes I made for the frock coat: 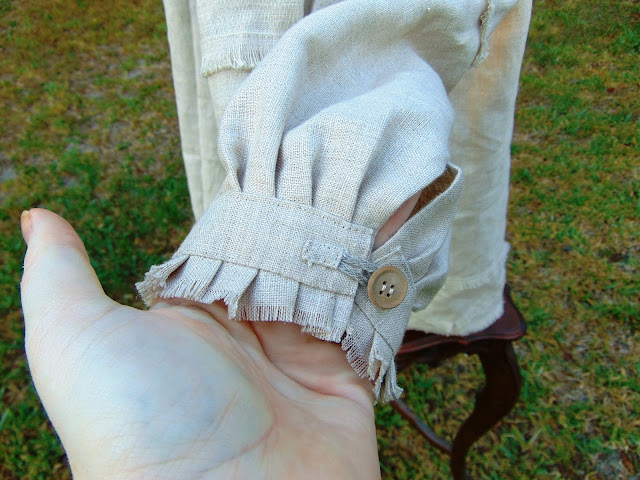 Cuff closing with a button and loop of linen cord.

I cut long strips of linen 30" x 1.25". They are then folded in half to create strips 30" x 5/8". I stitched them to the jacket before the process of pulling the threads out to create fringe (by hand, standard long back stitch, roughly 1/8" from folded edge). If you try to create the fringe first you'll just end up frustrated working with it when it comes time to stitch on.
As tempting as it may be to have one long piece to avoid joins, don't cut your strips much longer than 30". It will make pulling the threads later a nightmare.

The most important part of this step to make sure you are cutting the pieces as perfectly on grain as possible. This is why I recommend cutting the strips parallel to the selvage, so you can use the first cut, removing the selvage, as your grain guide. Another method, if your fabric is loose-weave enough to allow it, is to pull a thread out before cutting so you can clearly see the grain path and cut along it.

If your strips are not on grain, you will end up with uneven fringe after you start pulling the threads. Meaning, the fringe will be too deep at one end, and not deep enough at the other. (Above and below) Some of the fringe strips, not yet pulled, pinned along the design markings for stitching. The edge fringe has already been pulled.
The below image shows the right front, with the collar at the top. The cape has not yet been attached. 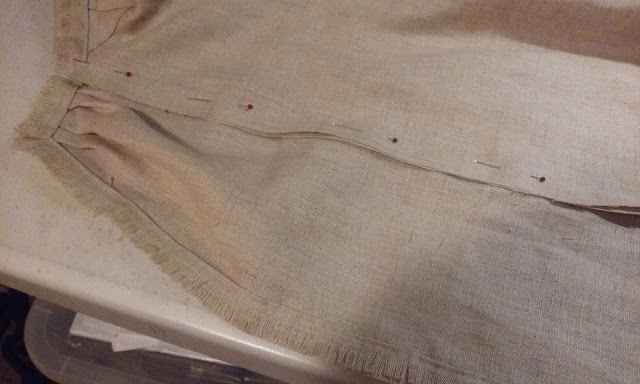 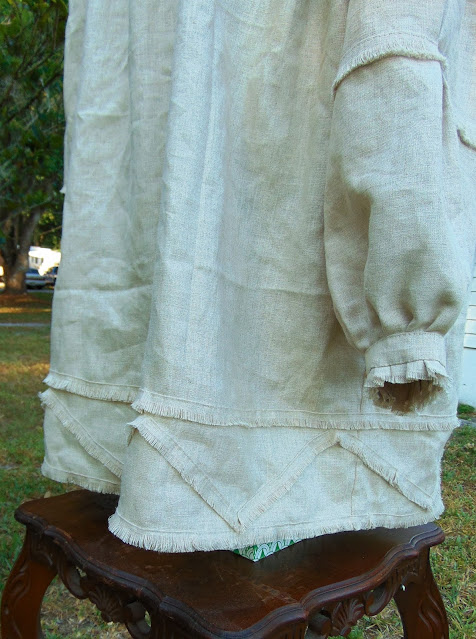 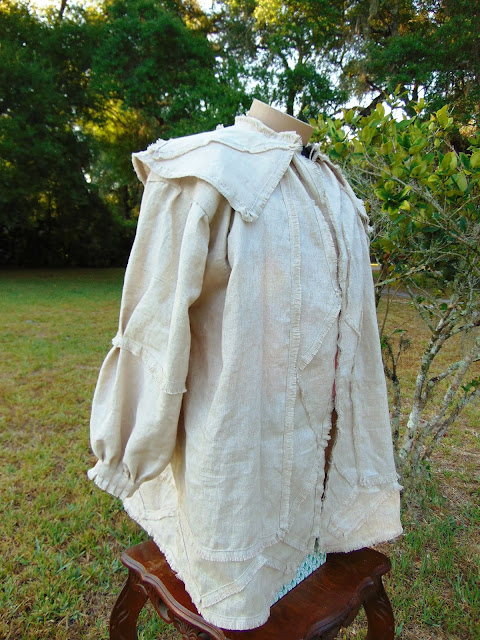 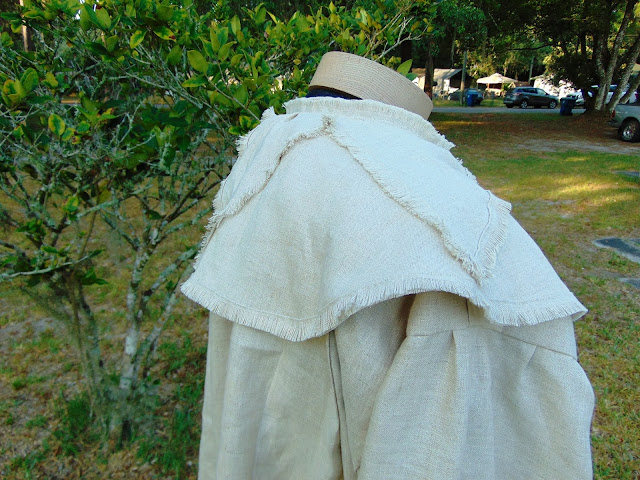 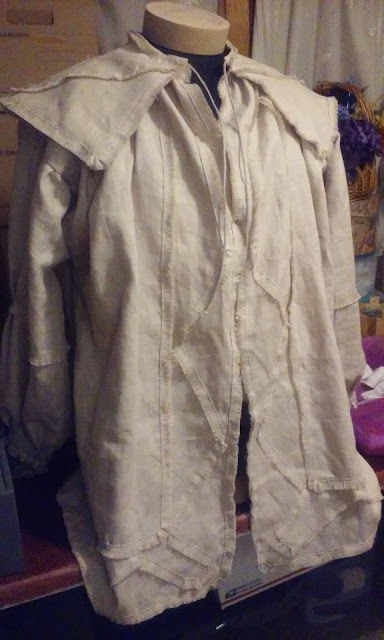 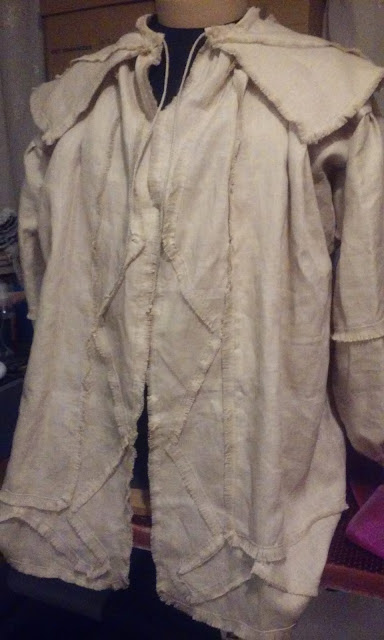 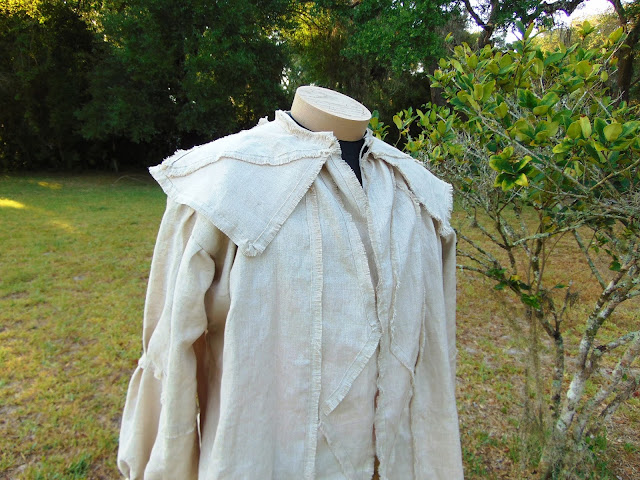 (Below) Shows the inside of the garment, the strips that reinforce and bind the seams of the armhole. There are no raw or exposed edges in the garment, everything is bound either with separate strips or with flat-felled seams. 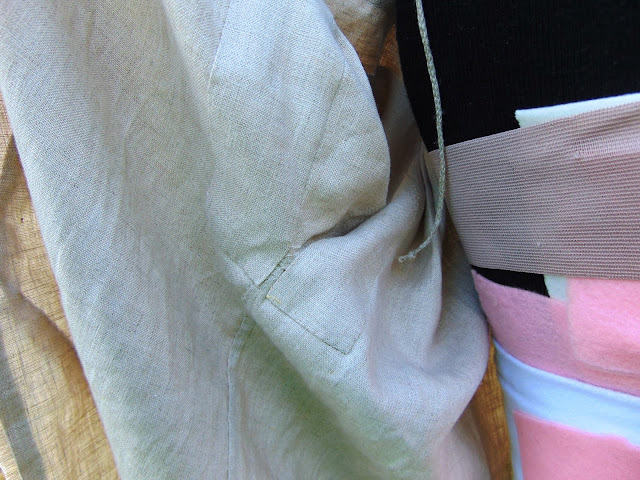 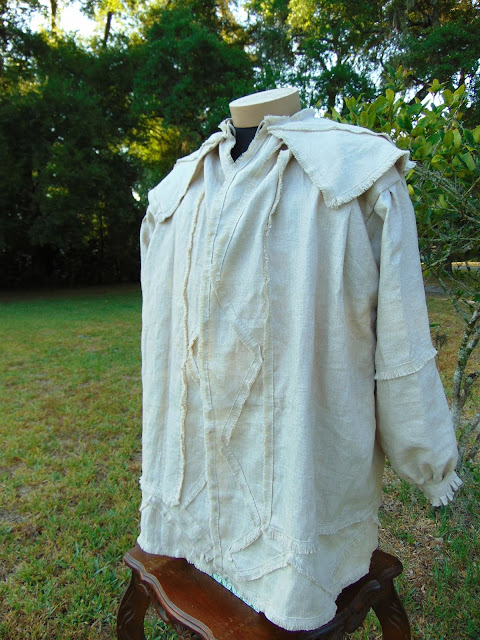 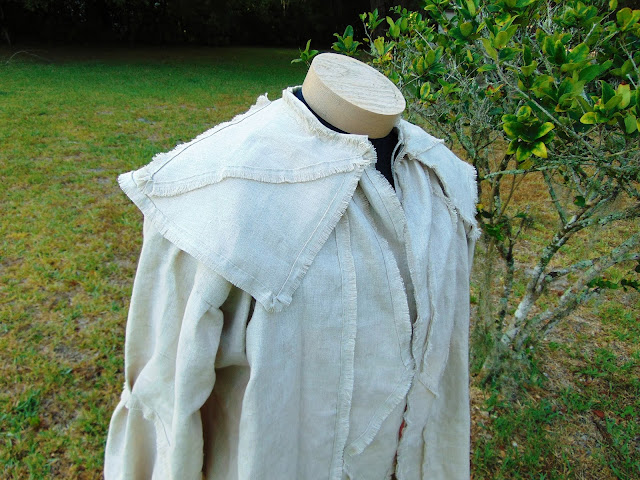 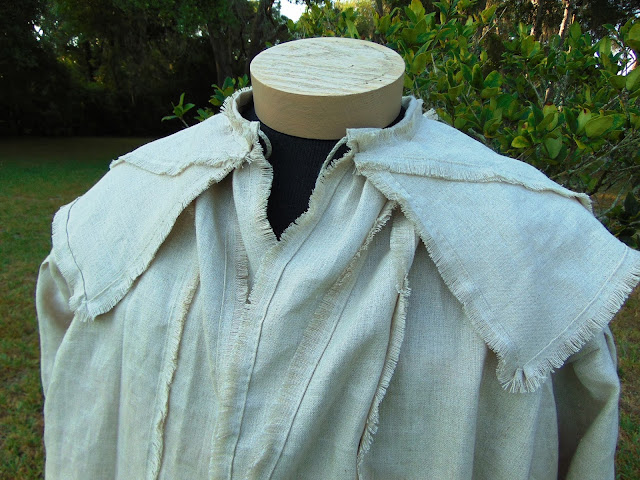 (Below) You can see a seam going through the middle of the shoulder here. This is not really a seam, but a 2" pleat designed to take in the width of the shoulders. Since the body pieces of these shirts were cut as a rectangle, they didn't allow for size distinction between shoulders and waists.

For example, a man with narrow shoulders might still have a large waist, which would result in cutting a piece big enough for the waist, but now far too large for the shoulders. This pleat adjusts for the narrower shoulders without losing width in the rest of the garment. It is top stitched down from the shoulder 8" along the front and back. The pleat goes through the shoulder strip, rather than under it, so that it can potentially be adjusted later to fit different wearers =) 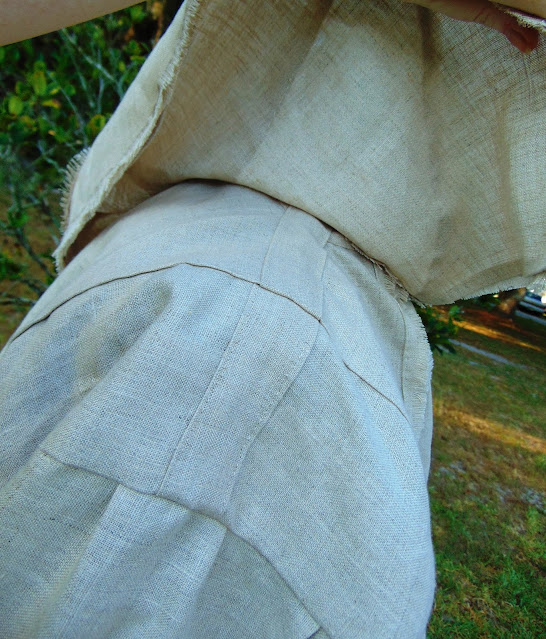 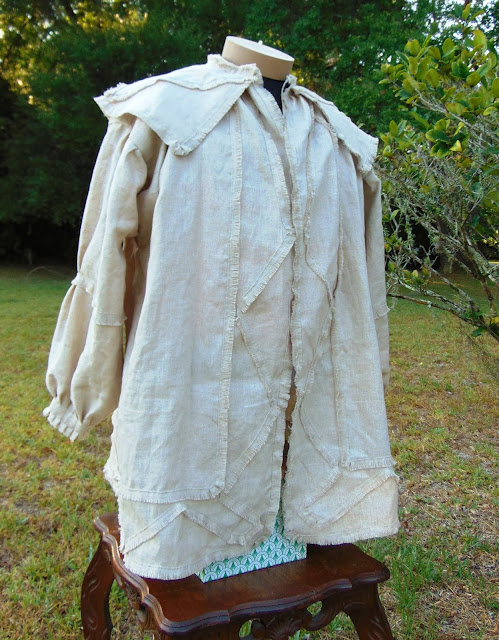 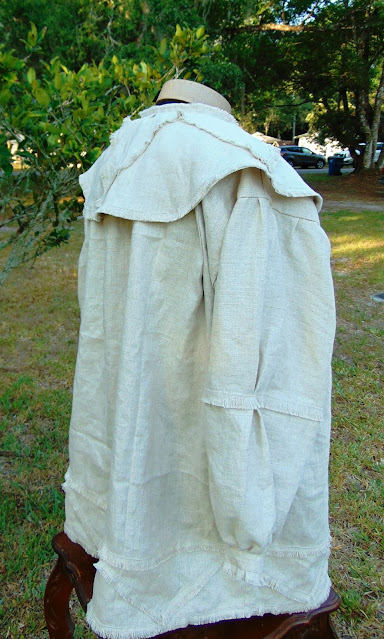 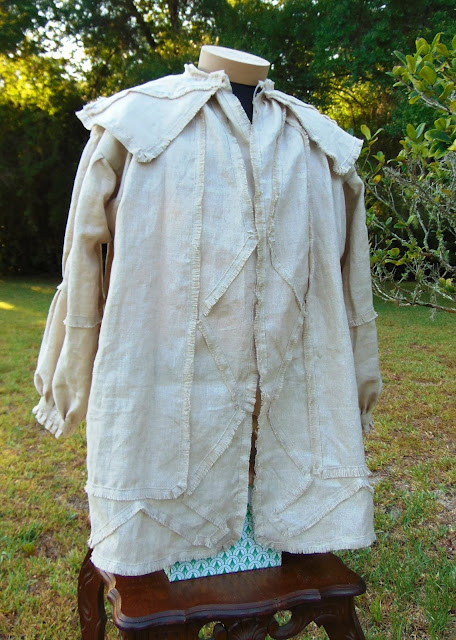 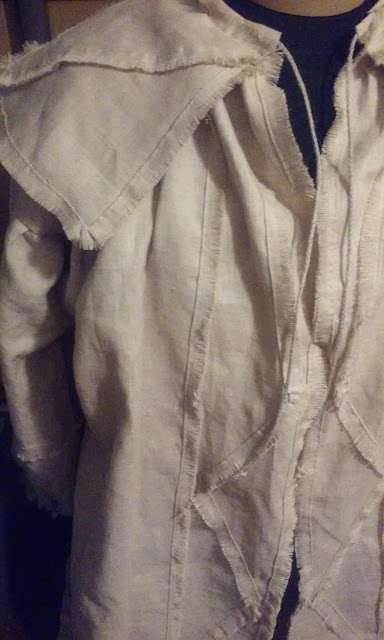