Inspiration
At first, my thought was to make an early 18th century jacket from the cut of a riding habit. Early in the century, casual jackets were often cut with the more relaxed pattern associated with riding habits, though with lower necklines and shorter skirts. The image below is a good example, especially with the pocket flaps. 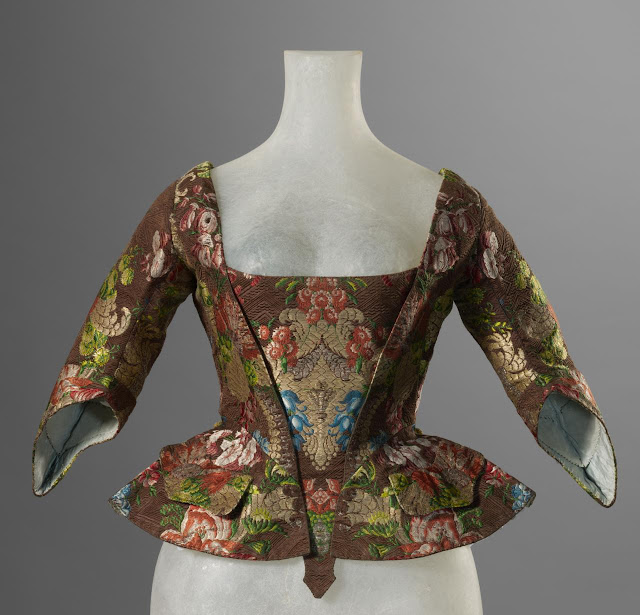 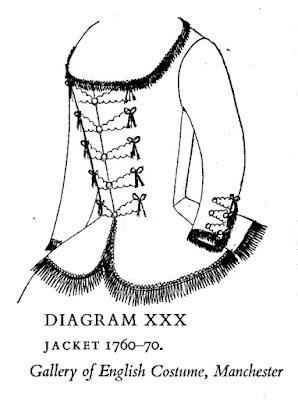 Eventually I decided to go with a pattern I already had drafted out--for the sake of time--and which was similar enough. The 1760 Jacket from The Cut of Women's Clothes has the more relaxed cut I was after and the low neckline. I just cut away the fronts to accommodate the stomacher I wanted. After that, it was just minor changes to the sleeves and the addition of cuffs. Otherwise, the body of the jacket is unaltered from the Norah Waugh pattern.

Stomacher
If you're going to be wearing a stomacher over a well boned pair of stays (as you almost always should), they really don't need to be boned or heavily interfaced themselves. But, I wanted the wearer of this jacket to have the option of wearing, perhaps, just a casual "pair of bodies" underneath rather than a heavily boned set of stays. That's why I made the stomacher with extra care. 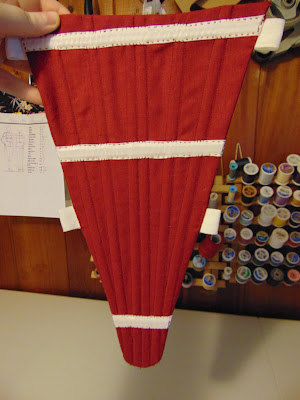 The stomacher is comprised of 3 layers of brick red linen, and has 9 separate bones, 3 of which are horizontal (horizontal boning in stomacher and stays can make all the difference, really. I highly recommend doing it). The vertical boning channels are done first, then the horizontal channels are laid over them with separate strips of fabric to serve as the channels. Obviously it has to be this way, because you can't stitch through the vertical bones. The white strips of fabric are 100% taffeta, from scraps I had left over (this is why you never throw away scraps for precious good like high quality silk=) )


The boning is 3/8" heavy duty nylon zip ties, which work incredibly well, and don't have the burdensome weight of spiral steel (or the price tag). 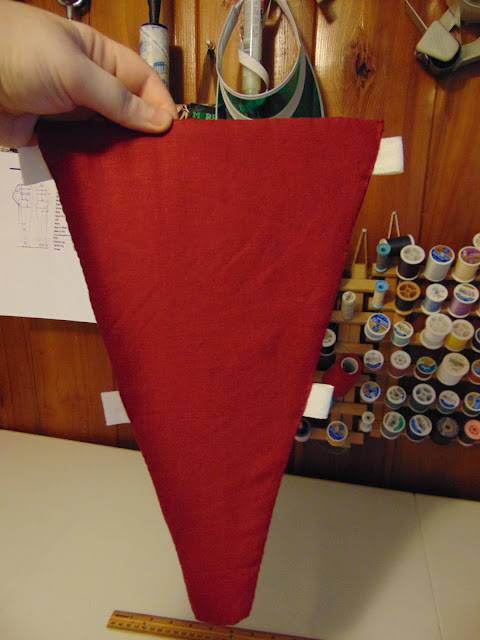 Petticoat
For this petticoat, I decided to do a flat front style. It's two panels of fabric 58" x 44". The front panel is shaped at the top to lay flat 9" across, with the close pleating beginning after that. The 9" straight area is cut 3" lower, then steeply curved up to 1.5" lower at the side openings. The back panel will then be shaped to go from the 1.5" decrease (meeting at the sides) to the full height of 44" at the back. The purpose of all this reshaping at the waist to to allow the skirt to hang over a bumroll and still have a level, straight hem at the bottom. 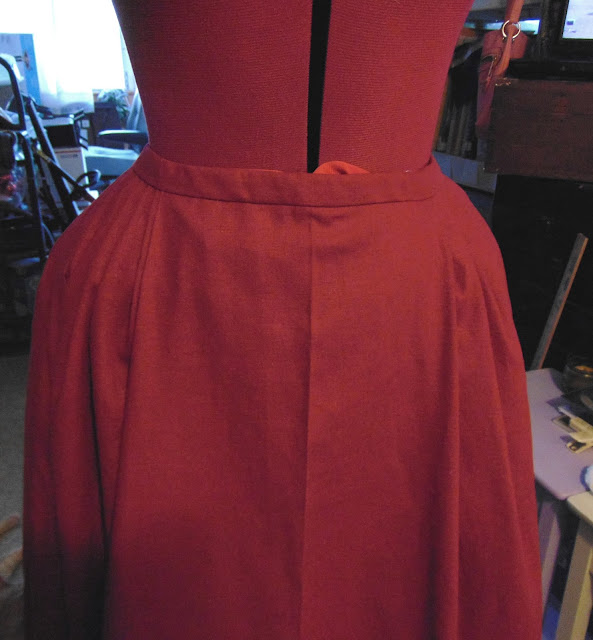 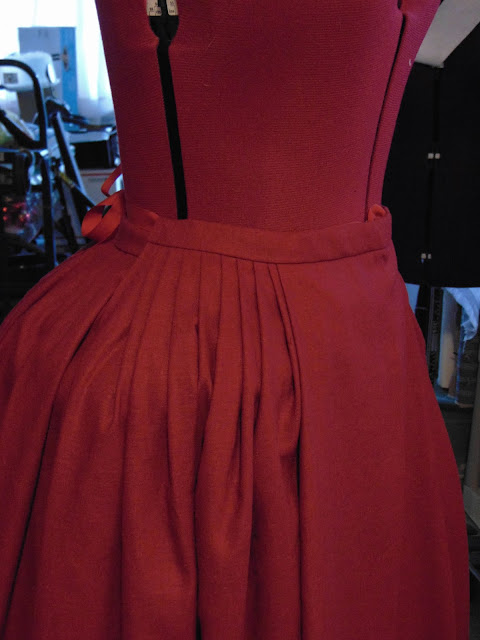 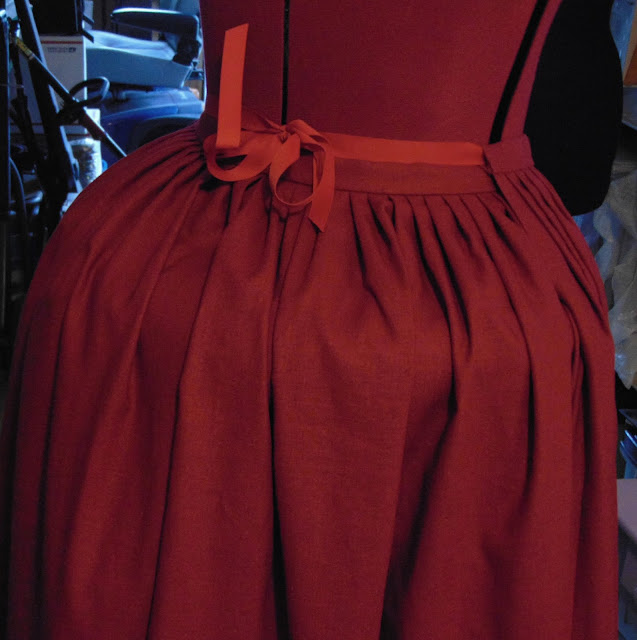 The bumroll is not really that large at all, and wraps snugly around the hips until coming to very narrow points. 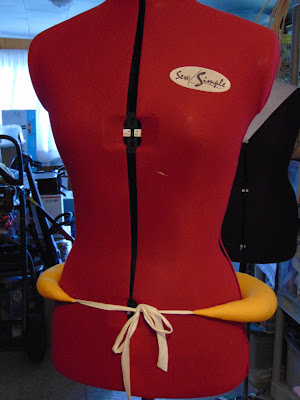 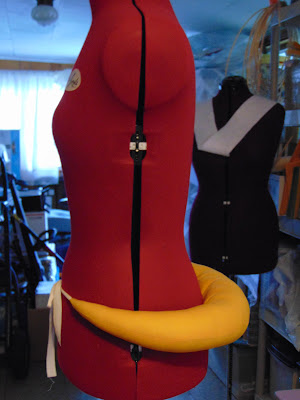 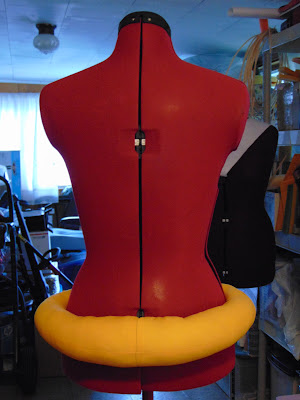 Jacket
The open fronts of the jacket have a boning channel on the inside of each side, stitched to the lining. Edge stitching (done by hand) later helps hold the channel in place. I did eyelets of matching thread on the other side of the boning for the lacing. The gold rings you see are anchor points to secure the lacing at top and bottom. Since this jacket has spiral lacing, you need at anchor point at the beginning and end of the lacing. You could also lace this jacket in the typical cross method if you wished, though this is more accurate. 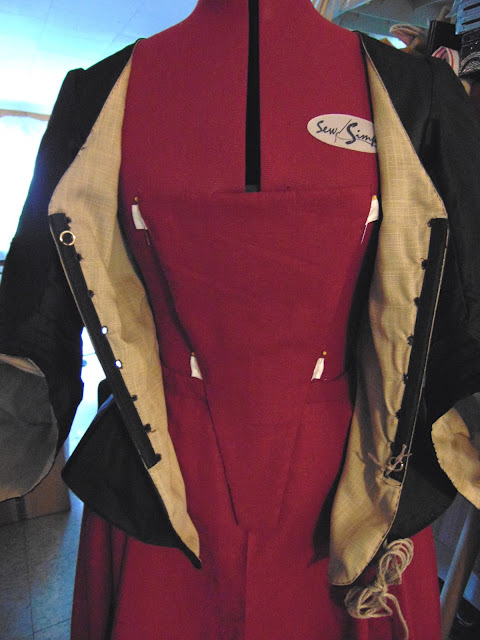 The jacket has edge stitching, done by hand, all around. 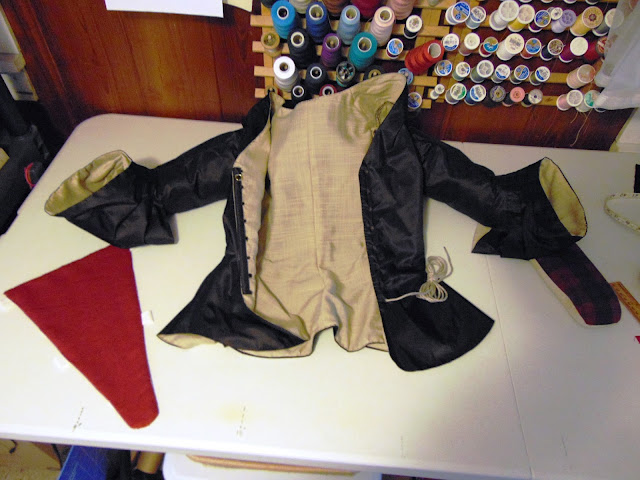 18th Century Winged Cuffs
Confession: I used to hate this style of hanging cuff, or winged cuff, as I've heard it called. That was because I didn't understand how they were intended to be worn. At first, I thought this style looked silly because it's just a fold of fabric around your elbow. I mean...no one would think it's actually a folded back cuff when they can see daylight through the thing like a broken pipe, right? Right?

No, I was wrong, because the front of the cuff, that big open area, is to be filled with lace, or the voluminous ruffles of a 3/4 sleeved chemise. Once you do that, these cuffs looks amazing. In fact, I think I like them even more than the standard hanging ruffles you often see on a sack gown or Anglaise later in the century. 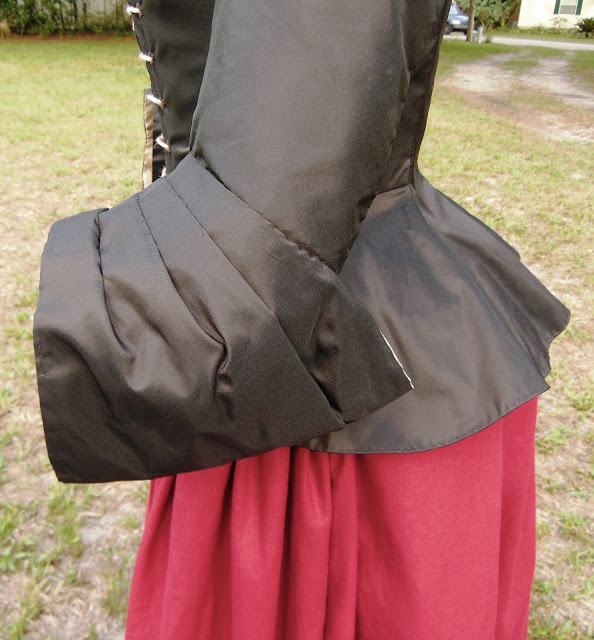 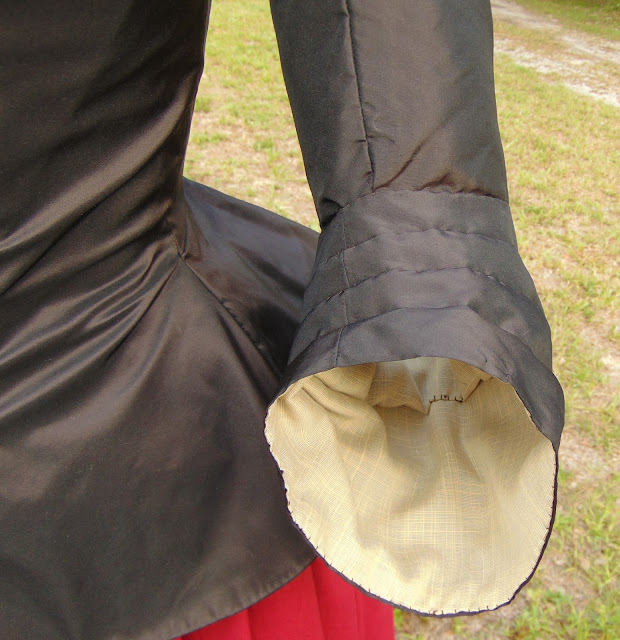 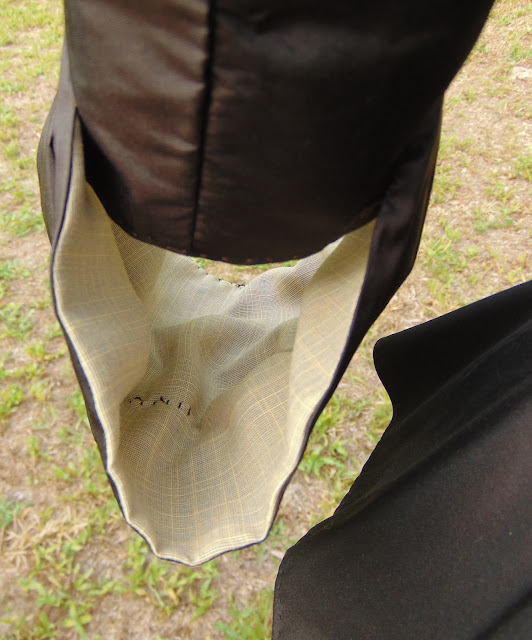 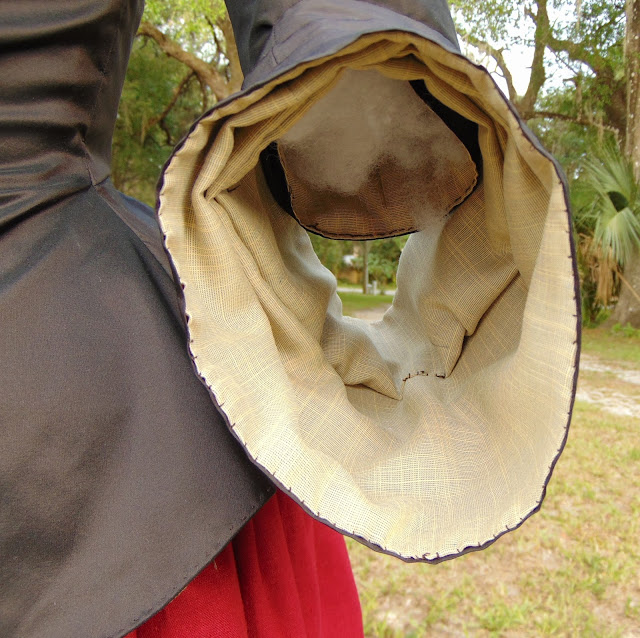 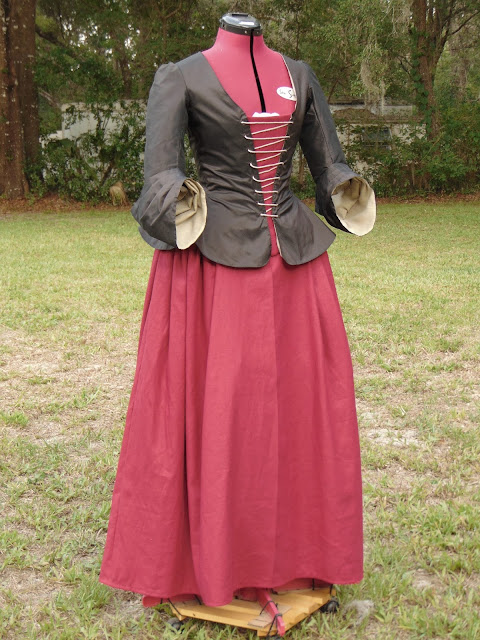 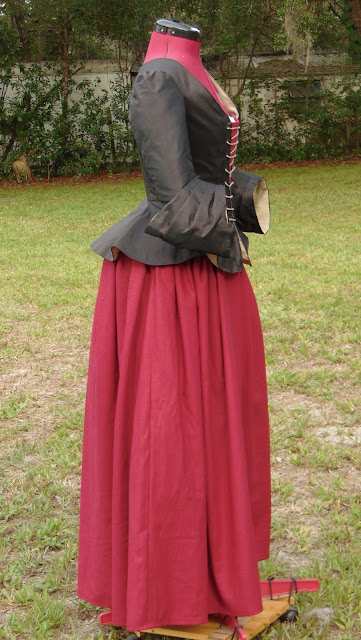 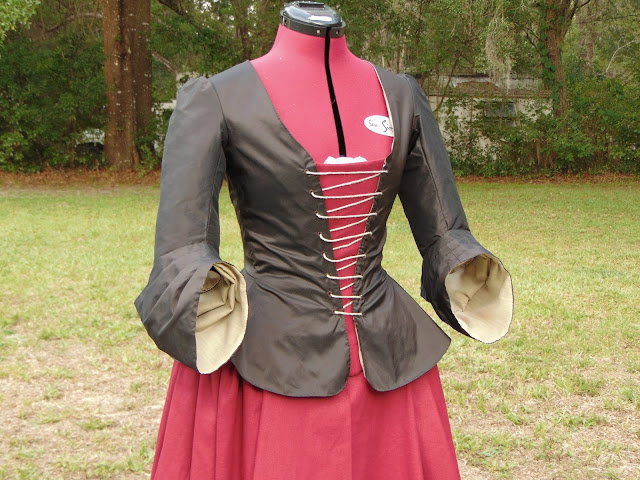 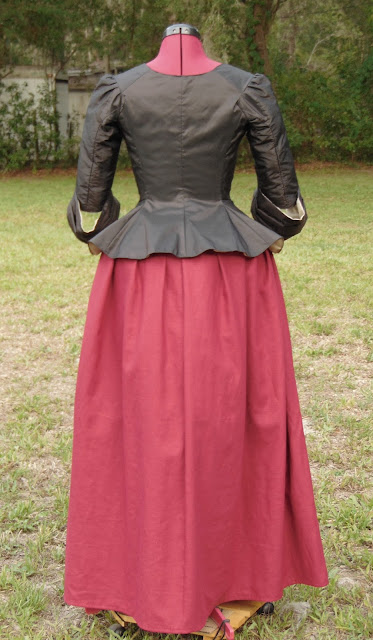 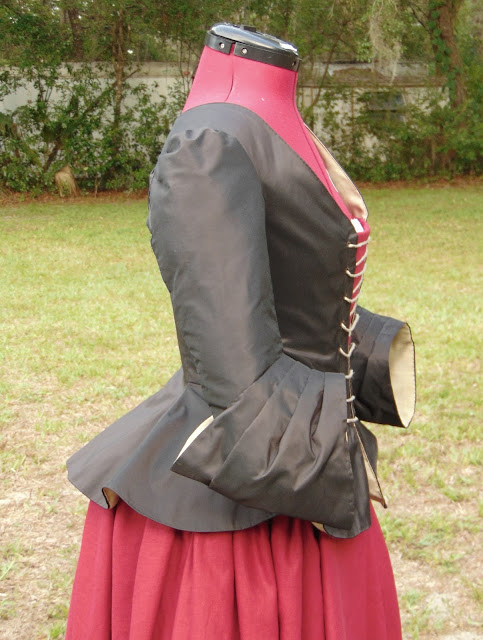 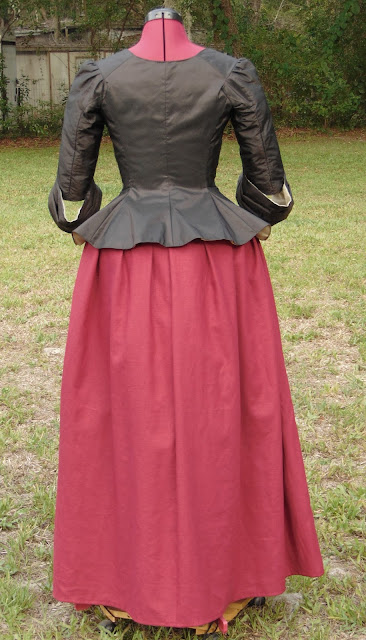 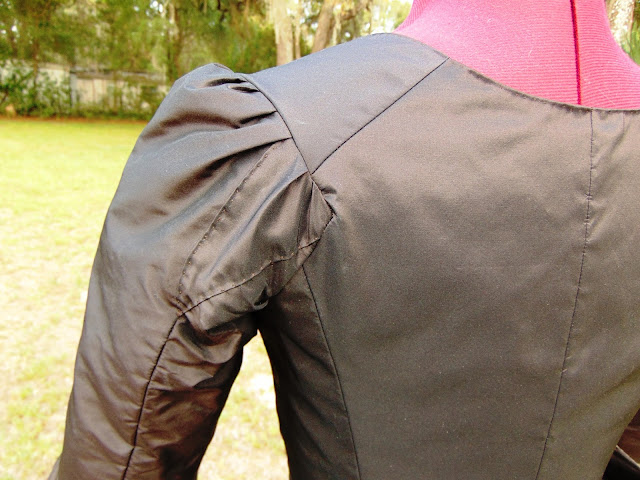 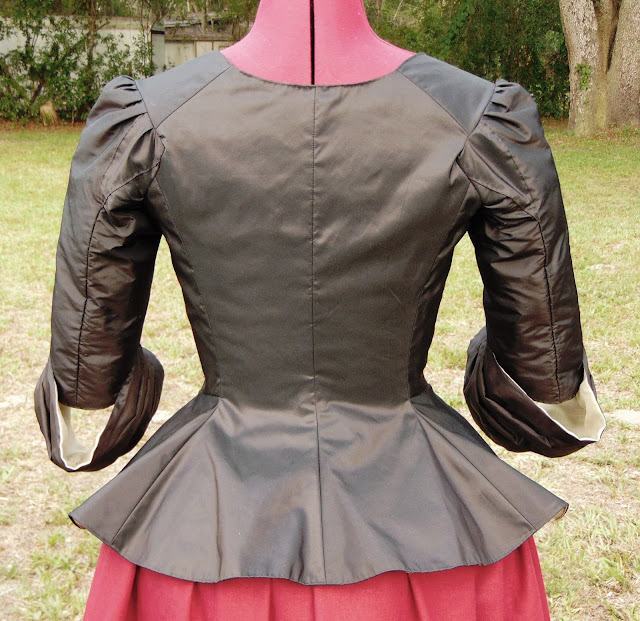 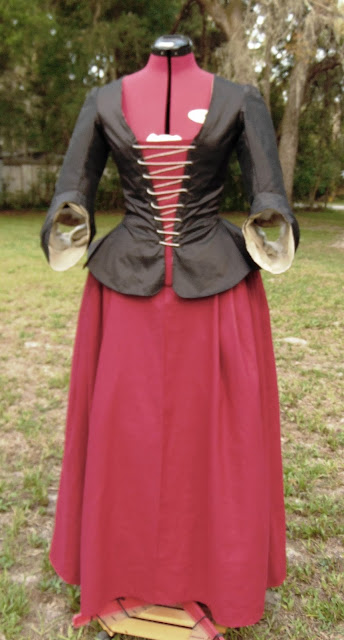 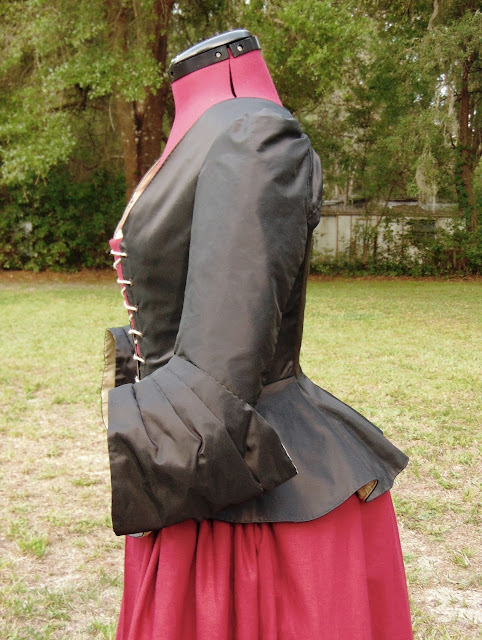